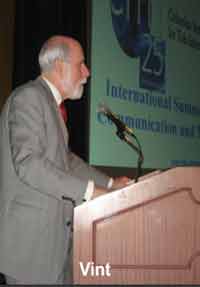 “sender pays/termination charge/enhanced quality of service… fails.” ETNO – the big European telcos – wants a share of online video revenue. Deutsche Telekom and France Telecom, like most Euro telcos, are struggling because landline voice is disappearing and they still haven’t adjusted to competition. Earnings at both are below the dividends they pay. They are looking for revenue wherever they might find it.
Vint Cerf has been following this issue since Dave Farber and Vint’s partner Bob Kahn created the first Internet peering arrangement. He made some comments on an Internet Society list and I asked if he’d explain his point of view on the record. He responded:
“Sustainability is essential for the Internet’s continued utility. That means that all its costs need to be paid for. This does not necessarily dictate any particular business model and one can find many in the loosely-coupled Internet ecology. ETNO has proposed that application service providers pay ISPs everywhere in the world for ‘better service delivery’ for users of Internet access provision.
It is generally the case, in the Internet, that all users (including application service providers) arrange for access to the Internet. Essentially the users (and I apply this term to application providers also) get access to the Internet under local terms and conditions and then proceed to use the Internet for whatever purpose suits their interests. ETNO seems to want to return to the ‘sender pays/termination charge’ model of the past. Recently, it has introduced a variant in which the “sender” pays for ‘enhanced quality of service.’
This notion fails on two counts. First, it suggests that the income from users paying for local access is insufficient to compensate for the cost of providing access. The obvious solution is NOT to charge every source of traffic on the global Internet. Rather, local costs should be reflected in access prices (possibly modified by local subsidy decisions). Second, it implies that the “ordinary” service isn’t good enough quality and that the traffic sources should pay (every access provider) for “enhanced quality of service.”
The shadow of “monetizing scarcity” looms in such proposals. Taken to an extreme, costs for every user and application provider would rise in such a model. In the Internet, demand is driven by the users on the receiving side. Since the Internet operates in a symmetric way, both sides have an obligation to defray local access costs and the intervening networks need to work out bilateral interconnection agreements.
Old business models and the companies that revolve around them are often challenged by new technology. Darwin was right, there are only two choices: adapt or die.”
Personally, I don’t think Deutsche Telekom or France Telecom is going to die. But the solution isn’t to tax the net. First step is to follow Telefonica and sale off some corporate jets.