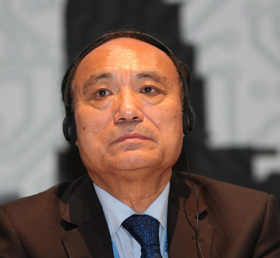 18 year old Houlin Zhao was sent to live with the peasants. “I worked in the rice fields and in construction. It was a very hard time. My father made clothes and we were not affluent but what I saw in the country was very different. Even after 30 years as a technical expert I have never forgotten what I saw.” I asked what he was doing before 1973 because it was a challenging time in China. The country was still in upheaval after the Cultural Revolution. The failure of the Great Leap Forward was a decade in the past. Deng Xiaoping’s reforms were a decade in the future.

In 1975 Zhao graduated from the Nanjing University of Posts and Telecommunications and spent a decade working for the Ministry. He won awards, wrote articles and attended international conferences. Master of Science in telematics from the University of Essex in England.

For 12 years he was a staffer at the ITU. In 1999 he became Director of the Sandards Bureau, ITU-T. Next was Deputy Secretary-General. At in Busan October 2014 he will succeed Hamadoun Toure as Secretary-General.

Houlin is gracious and thoughtful, very well liked by people who knew him in standards work. His style is very modest and he has carefully avoided any conflicts. I’ve asked a dozen people from U.S. Ambassador Sepulveda to Vint Cerf to Columbia Professor Eli Noam. All said he is hardworking, conscientious and well-liked. They all wish him well. But no one had any insight into his personal opinions or life experience. His private beliefs remain private.

His style is the opposite of his predecessor, possibly the most open and forthright politician I’ve met. When Hamadoun discussed at Columbia the power of the Internet to bring better health care to the rural poor, he mentioned he had malaria three times as a child. He went on to note malaria  can be cured with inexpensive drugs but too many people die. The horror of that is clear as as he speaks.

<p>    Zhao is the most guarded public official I’ve reported on. I didn’t find a single article or interview that shed light on his beliefs.  I found about two dozen speeches and articles on the web. I didn’t find a single comment worth including here to reveal his personality or true thoughts. He said simply presented the agreed views of the ITU, WSIS and other U.N. agencies. He wants the ITU to bring information and communication technologies to everyone in the world. He believes the ITU should closely cooperate with member states, companies and civil society. Some people call that “multi-stakeholder,” an ill-defined term. Zhao supports “multistakeholder” whatever it means, as is required by the current fashion. The process should be open, transparent and guided by expert opinion. He returns often to the theme of connecting everyone from which I infer that’s especially important.

That makes him a man who does his job in a way that will never make enemies, an effective strategy for a civil servant. But except for his brief comment about growing up in 1960’s China, I have nothing to add to the official biography and statements below.