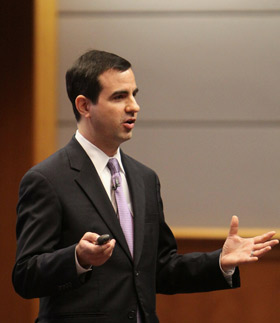 Gigahertz frequencies support gigabit and ten gigabit wireless. The U.S. FCC, led by John Leibovitz, is following the progress very closely. They’ve just issued the Spectrum Frontiers NOI. They are asking many of the right questions here and it’s the job of our community to give them some answers. I’ve had a chance to discuss these issues with the FCC people involved. They’ve obviously done a great deal of research. The FCC is reaching out out to several of the leading experts for ideas. I believe they intend to get this right.

A NOI (Notice of Inquiry) does not propose action. Instead, NOI’s collect information that will inform them as they make proposals. The conflicting claims about spectrum are hard to reconcile even with proven technology. Good information about what’s practical in high frequency is just being discovered, making it even harder to reach a decision. The payoffs are potentially so large that many countries are moving ahead very quickly. Japan and Korea intend to deploy 5G in 2018 even though nothing is out of the labs yet.

The European Union and Korea have both dedicated $1B for research in this area; the U.S. has only scattered funding. Despite that, much of the most important work is being done here, by people like Andrea Goldsmith of Stanford, Robert Heath of Texas & Ted Rappaport of NYU.

The FCC can’t deliver much money but they can set the rules in a way that moves things forward. In addition, effective government leaders can use the power to convene to good effect. Megan Smith, the new CTO of the United States, will do that very effectively, Vint Cerf tells me.

It’s remarkably easy to file comments; anyone who doesn’t know how should ask me. It’s also surprisingly easy to meet directly with the people making a decision. If you show you bring experience and ideas to the discussion, they actually want to meet you. Most of the FCC is sick and tired of the usual silver tongues the companies send in to persuade them. Technical people actually are much more welcome and you absolutely do not need to waste money on a lawyer to get an FCC meeting.

Let’s help them out.

Here’s the beginning of the NOI. The 30 page original is very dry and loaded with jargon, but they are asking many of the right questions.

1. In this Notice of Inquiry, we begin a proceeding to examine the potential for the provision
of mobile radio services in bands above 24 GHz. As technologies continue to evolve, innovators are
working to tap into the potential of using high-band spectrum for mobile services. In particular, industry
and technical groups are beginning to examine the use of higher frequencies sometimes known as
millimeter wave (mmW) bands for mobile use.1 This examination of the possible uses of the mmW bands
for mobile use takes place within the context of broader efforts to develop technical standards for socalled
Fifth Generation (5G) mobile services. In view of the technological and marketplace developments
outlined in this item, we seek to discern what frequency bands above 24 GHz would be most suitable for
mobile services, and to begin developing a record on mobile service rules and a licensing framework for
mobile services in those bands.
2. This Notice of Inquiry builds on work done by the Commission’s Technological Advisory
Council (TAC) and fulfills a TAC recommendation. This proceeding is not a substitute for our efforts to
make additional lower frequency spectrum available for mobile services, but rather is a supplement to
those efforts. As innovation and development focuses on using higher bands to help support mobile
broadband, we aim to help foster a regulatory environment that is responsive to these technological
changes. We also seek to advance our understanding of the means by which mobile services can avoid
interfering with each other and with incumbent services and users that may share the same frequency
bands as well as the impact on adjacent band radio services. We expect our inquiries in this proceeding to
lay the foundation for more detailed proposals to be developed in subsequent rulemaking proceedings.
3. The Commission has a longstanding practice of adopting flexible service rules for mobile
wireless services, and has generally eschewed mandating the use of specific technologies or standards,
preferring instead to let innovation and market competition drive the direction of technological
development, and to put in place regulations that can accommodate future technological advances. We do
not anticipate deviating from these principles as we examine the suitability of bands above 24 GHz for
mobile services. While our inquiry is informed by the work of many different stakeholders to develop and
define the next generation of mobile wireless services and technologies, in this proceeding we are not
attempting to define, standardize, or specify the characteristics of 5G service. Nor do we anticipate
ultimately adopting rules that will incorporate a specific 5G standard. Our use of the term “5G” in this
item, therefore, is intended as a convenient shorthand rather than a circumscription.

II. BACKGROUND
4. Today, mobile broadband networks generally use spectrum bands below 3 GHz,
primarily due to the favorable propagation characteristics of that spectrum and the ready availability of
components.2 Over time, as technology has advanced, operators have used progressively higher
frequencies for mobile wireless use. The first band used for mobile wireless use was 845-890 MHz (the
Cellular Radiotelephone Service).3 Today, the Personal Communications Service and Advanced Wireless

Services bands, which are generally in the 1.7-2.1 GHz range, are used extensively for mobile wireless
service.4 The Broadband Radio Service and Educational Broadband Service in the 2496-2690 MHz band
have been used more recently for mobile broadband service.5 Recently, we sought comment on a detailed
proposal for establishing a new Citizens Broadband Radio Service in the 3550-3650 MHz band that could
leverage new methods of spectrum sharing and promote a diverse array of network technologies, with a
focus on relatively low-powered applications.6

5. Until recently, the prevailing assumption was that mobile service in higher frequency
bands, such as bands above 24 GHz, was infeasible because radio waves at those frequencies travel in
straight lines and could provide only line-of-sight service. Also, the propagation and atmospheric
absorption characteristics of higher frequency bands significantly reduce the coverage of individual base
stations and require a very expensive network to achieve a reasonable extent of aggregate coverage. As
discussed further below, however, some of the leading wireless equipment manufacturers are now
developing ways to provide non-line-of-sight services in higher frequency bands with increased range.7
The National Science Foundation has also funded basic research in 5G, including making mmW
propagation measurements.8 In addition, in 2014 the National Institutes of Science and Technology
created a new Communications Technology Laboratory (CTL) that will, among other things, “promote
interdisciplinary research, development and testing in areas related to advanced communications such as
radio frequency technology, digital information processing, cybersecurity, interoperability and
usability.”9 The CTL is also a joint partner with NTIA in the Center for Advanced Communications
(CAC), which will “provide opportunities for collaborate R&D and access to test-bed resources.”10

6. As they have developed, mobile wireless communications technologies have progressed
through several “generations,” each of which has advanced the nature of mobile wireless services. The
first generation of wireless technical standards, or 1G, originated in the 1980s and was based on analog
technology. The first digital wireless systems were known as 2G technologies. While there are a variety
of different definitions used for 3G and 4G wireless technologies, the International Telecommunications
Union (ITU) adopted standards that are often cited as definitions of 3G (IMT-2000) and 4G (IMTAdvanced)
standards.11

7. During the past year, significant momentum has started to build around the idea of a
“Fifth Generation” that will substantially exceed the capacity of existing mobile technologies.12 There is
as yet no consensus definition of 5G, but some believe it should accommodate an eventual 1000-fold
increase in traffic demand,13 supporting high-bandwidth content with speeds in excess of 10 gigabits per
second (Gb/s); end-to-end transmission delays (latency) of less than one-thousandth of a second; and, in
the same networks, sporadic, low-data-rate transmissions among an “Internet of things”14 ? all of this to
be accomplished with substantially improved spectral and energy efficiency.15 Achieving these objectives
will likely require the development of new system architectures to include heterogeneous networks that
will deliver service through multiple, widely-spaced frequency bands and diverse types of radio access
technologies, including macrocells, microcells, device-to-device communications, new component
technologies, and unlicensed as well as licensed transceivers.16 In this context, bands above 24 GHz are
typically considered not for stand-alone mobile services but as supplementary channels to deliver ultrahigh
data rates in specific places, as one component of service packages that will likely include continued
use of lower bands to ensure ubiquitous coverage and continuous system-wide coordination.17

8. In connection with these developments, standards bodies and industry groups are working
to complete the preparation of 5G technical standards in 2016-2018, with initial deployment of services
using these technologies expected around 2020.18 The International Telecommunication Union
Radiocommunication Sector (ITU-R), through its Working Party 5D, has begun a detailed investigation
of the key elements of 5G.19

9. Organizations representing diverse countries and regions have already launched programs
oriented toward research and development of so-called 5G services. The European Telecommunications
Standards Institute (ETSI) is providing a framework for two initiatives, 5GNOW and METIS (Mobile and
Wireless Communications Enablers for the Twenty-Twenty Information Society) to study new
waveforms and technical capabilities to meet traffic requirements in 2020; the 5G Research Center in the
United Kingdom is developing a test bed for 5G technologies, and China’s IMT-2020 Forum is studying
user demands, spectrum characteristics, and technology trends that will underpin 5G developments.20