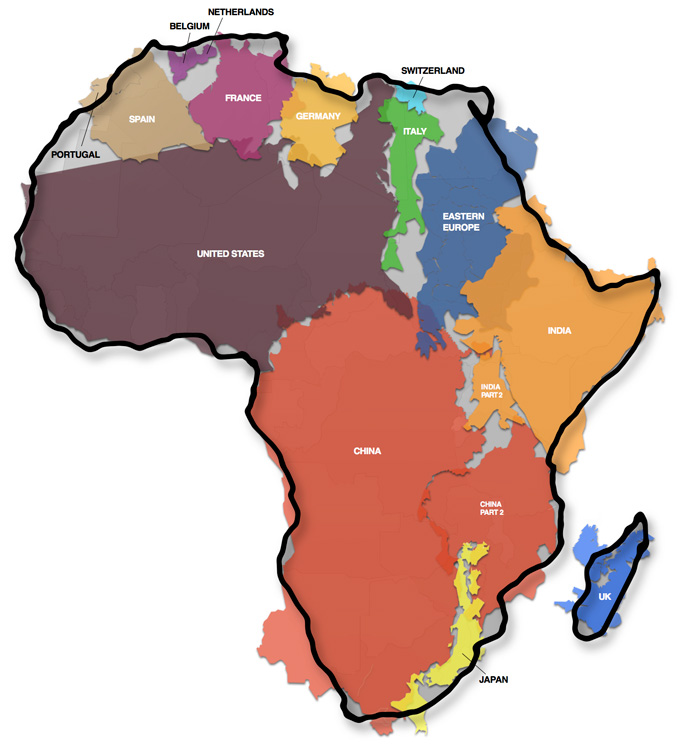 300,000,000 smartphones coming soon. Carlos Slim of Telmex tells me the world is about to change. “Two billion more people will connect to the Internet when smartphones cost $50. The phone makers are promising me a $50 phone in 2014.” If Spreadtrum and Firefox deliver a $25 smartphone, as promised, that could accelerate takeover.

~310,000,000 Africans will be connected to the Internet in 2017, Arielle Sumits of Cisco predicts. The population of the U.S. is about 310,000,000, Africa over a billion. It’s inevitable that the U.S. will be dwarfed by the rest of the world. In Africa, there are already about 450,000,000 mobile phone users with substantial growth continuing. Most of them will get Internet-capable phones in the next few years.

There are fewer than 10M broadband landlines on the continent, about one line per hundred people.

Egypt has 2.5M landlines, about 14% of households. Only Egypt, South Africa and Algeria have more than a million.

The Internet expansion is remarkable. Kenya is calling itself “Silicon Savannah” with an estimated 12M connections for 40M people. lat.ms/1gLNo69 98% are wireless. Dr. Bitange Ndemo as Communications Minister proposed some of the most advanced spectrum policies in the world. Building a single network in 100 MHz provides an estimated 30%-70% more capacity.

Many of the African regulators understand networks better than any recent FCC commissioner. Most are engineers, several with doctorates. U.S. regulators are mostly lawyers. They often are brilliant but technological naivete has produced many fundamental mistakes.

Particularly in the U.S., few realize that African economies are (finally) growing at twice the speed of the West. “Africa is no longer an object of our fears or hopes or pity,” said Todd Moss. But “the United States is stuck in a bit of a time warp,” only recently catching up to the changing realities on the ground (NYT).

The 300,000,000 estimate is from Cisco’s VNI data, the most accurate picture of Internet use publicly available. In the published data, Africa was combined with middle eastern countries but Cisco disaggregated the numbers at my request. Like any estimate of a dynamic growth situation, there’s considerable uncertainty; it wouldn’t be surprising Africa actually overtakes the U.S. a year or two before or after 2017.

There are several estimates of 700,000,000 mobiles in Africa. That’s a count of SIM cards, so I’m using a figure of 450,000,000. Many phones today take two SIM cards. Networks list phones as active even though the owner has already switched to  different provider.

With growth over 10%, even most of the poor will soon have a voice.