This is an important breaking story. I’m posting here all primary documents I can find as well as any responses from the companies. I hope this is helpful to reporters and others looking for information. Some of these articles contradict others, often because there is no consensus. The spin on this in Barcelona is extreme. My opinions at http://5gwnews.com/90-r/149-verizon-ericsson-want-wifi-spectrum-for-ltehttp://5gwnews.com/90-r/170-qualcomm-makes-the-rules-for-qualcomm-lte-wifi and more shortly to come. (LAA, also called LTE-U, is a proposal tp use some WiFi unlicensed spectrum for telephone company LTE..)

END_OF_DOCUMENT_TOKEN_TO_BE_REPLACED 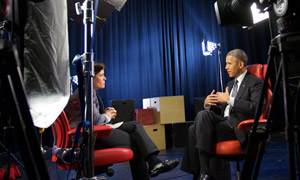 He said we must “find some international protocols.” Actual international cooperation on security would the overrule years-long State Department effort to keep governments away from Internet governance and especially security. It makes sense to cooperate. Internet security issues cross borders and the U.S. has just learned the hard way they cannot be resolved without international cooperation. Obama’s words are clear but I wouldn’t be surprised if his administration doesn’t follow through as I perceive it. Politicians do that.

Until now, the imperative of U.S. Internet policy has been the imperative to keep governments far away from net security. Everyone understands why. The 14 U.S. WCIT delegates from agencies like the NSA were not there to protect free speech.

Barack had the guts to be publicly interviewed by Kara Swisher, the toughest reporter in technology. His comment,

“What we’re going to need to do is to find some international protocols that, in the same way we did with nuclear arms, set some clear limits and guidelines, understanding that everybody’s vulnerable and everybody’s better off if we abide by certain behaviors.” — President Barack Obama

END_OF_DOCUMENT_TOKEN_TO_BE_REPLACED

Vint Cerf, Megan Smith, Marty CooperWith congestion already a problem, do we want more traffic from telcos? WiFi works if and only if users cooperate. Verizon, T-Mobile and SKT in Korea have no track record in spectrum sharing and have not shown they can share fairly even the spectrum they control that’s unused. They are testing extending LTE to WiFi spectrum. It’s time to resolve how that might work so that it doesn’t seriously reduce WiFi capacity for other purposes.

I believe that new WiFi applications will switch even more traffic to WiFi and reduce consumer costs. For example, Marconi fellow John Cioffi has shown a way to a home gigabit using WiFI and DSL.Many agree with me that more WiFi spectrum is the most efficient way to deliver more capacity to all of us, although Marconi Fellow Marty Cooper points to technical advantages of WiFi. Informally, the U.S. FCC has decided that at least half of the 3.5 GHz spectrum coming available will be available for WiFi.

much more at 5GW