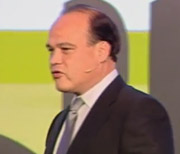 (Satire) Company CFO’s haven’t confirmed. Adtran’s Tom Stanton saw his stock go down -0.73% today while the market went up +1.47%. Scott Belcher, Tom’s handpicked TIA chief, issued a press release predicting “a slowdown in capital investment,” after the U.S. Net Neutrality order. Stanton is more vulnerable to a U.S. slowdown than any other large telecom vendor because over 60% of his sales are in the U.S. Adtran has done a remarkable job winning a large vectored VDSL contract in Germany in a fierce competition with Alcatel. To grow in Europe, they’ve had to accept much lower margins than in the U.S., making any U.S. cutback even more painful.

The U.S. is also a crucial market for wireless suppliers Alcatel & Ericsson. Both Verizon and AT&T have covered over 90% of the U.S. with LTE and are slowing down. Any further cutbacks would be particularly painful. Ericsson has just announced 2,000 layoffs and I’ve lost track of how

many people Alcatel has let go.  Alcatel and Ericsson are being propped up by a cartel arranged by the EU and China. Each is given about 10% of the Chinese market and Huawei is no longer bidding as aggressively for European contracts. The EU had to threaten huge tariffs to protect these “national champions.”

Both are extremely able companies but were scaled to grow while the telecom equipment market has been flat to down for about a decade.

Among those who have said the Net Neutrality order would not have a significant effect on capital spending are the CFO’s of AT&T and Verizon. A few months ago, AT&T cut an astonishing $4B from capital spending, the decade’s largest telco capex cut anywhere in the world. Verizon, CenturyQwest and the others have been flat to down in capex measured in nominal dollars for years.

Competition, technology change and market growth are the primary drivers of investment. Regulation primarily affects the level of profits. It’s bad form for a lobbyist to explain they are looking to increase corporate profits, but that’s what they usually mean when they discuss “incentives for investments.” There’s no public purpose in “incentives” that don’t work.

Tom Tauke of Verizon was one of the last lobbyists who could make their point while sticking to the facts.

Ed. note: Everything I wrote here is true. The price did go down but that was probably coincidence.  What Belcher said is a “politician’s truth.”

“The FCC order confirms that Title II is a Trojan horse that will open the door to heavy government control of the Internet and create marketplace uncertainty. With Title II in place, there is little to stop future commissioners from instituting government price controls or other market-distorting regulations. The FCC’s promise of a light-touch approach is just that – a promise. There is too much at stake to allow the future of the Internet to rest upon a simple promise.

“Regardless of how far the FCC pushes its future authority, the immediate uncertainty created by this plan will produce a slowdown in capital investment.  Consumers and small businesses, who have benefited enormously from the existing regulatory landscape, will bear the burden of a less robust network.  TIA is committed to working with Congress to achieve a bipartisan alternative that clarifies the FCC’s legal authority and assures a light-touch approach to net neutrality.”