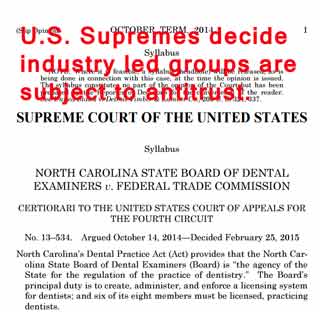 Prima facie case if industry comes together to block competition. The U.S. Supreme Court just made a powerful argument that standards bodies should be open and multistakeholder. They definitely can be sued. Over 15 years reporting on telecom standards, I’ve seen innumerable efforts in standards to favor some companies and exclude others. In one case, I believe a company forced out of business had a very strong case that could have resulted in nine figure damages. (Metalink) As the company ran out of funds, they decided they couldn’t afford the legal fees on what would have been a long drawn out case.

The “smoking gun” memo, signed by 11 international telcos, made clear to anyone with common sense they were trying to use LTE-U/LAA to hobble completion and free WiFi offloading. China Mobile, China Telecom, AT&T, CHTTL, KT, China Unicom, T-Mobile USA, Sprint, Telefonica, France Telecom/Orange and Telecom Italia in their candor invited an antitrust prosecution. There are enough wealthy companies interested in Wi-Fi legal fees should be easy to raise.

The smart move for ATIS and 3GPP is to open their groups to public participation.

Here’s an excerpt from the ruling. While it refers to Dental groups preventing others from whitening teeth, it would almost certainly aplly to phone companies and their suppliers hobbling Wi-Fi offlaod and carriers.

Held: Because a controlling number of the Board’s decisionmakers are active market participants in the occupation the Board regulates, the Board can invoke state-action antitrust immunity only if it was subject to active supervision by the State, and here that requirement is not met. Pp. 5–18. (a) Federal antitrust law is a central safeguard for the Nation’s free market structures. However, requiring States to conform to the mandates of the Sherman Act at the expense of other values a State may deem fundamental would impose an impermissible burden on the States’ power to regulate. Therefore, beginning with Parker v. Brown, 317 U. S. 341, this Court interpreted the antitrust laws to confer immunity on the anticompetitive conduct of States acting in their sovereign capacity. Pp. 5–6. (b) The Board’s actions are not cloaked with Parker immunity. A nonsovereign actor controlled by active market participants—such as the Board—enjoys Parker immunity only if “ ‘the challenged restraint . . . [is] clearly articulated and affirmatively expressed as state policy,’ and . . . ‘the policy . . . [is] actively supervised by the State.’ ” FTC v. Phoebe Putney Health System, Inc., 568 U. S. ___, ___ (quoting California Retail Liquor Dealers Assn. v. Midcal Aluminum, Inc., 445 U. S. 97, 105). Here, the Board did not receive active supervision of its anticompetitive conduct. Pp. 6–17. (1) An entity may not invoke Parker immunity unless its actions are an exercise of the State’s sovereign power.