Tom Wheeler embarrasses himself claiming AT&T is making a major concession on upgrading to fttb. I don’t know if Wheeler has been bamboozled or is telling a politician’s truth. AT&T’s 8-12M premises are about what they would offer anyway. G.fast is ready in 2016 to bring speeds of 400-700 megabits for $75-$250 anywhere there’s fiber to the basement. Randall Stephenson would be stupid not to upgrade at that price. Randall isn’t stupid.

Most of the 8.3M homes promised already have fiber to the basement, which AT&T has routinely installed for most of the last decade in “all new builds.” (Randall Stephenson, then CFO, in 2004.) The new builds during the four years of the program plus the fiber run as part of AT&T’s Project VIP reach more than enough homes to meet this figure.

AT&T decided at least a year ago to do the upgrades, whether or not DirecTV is approved. They’ve already done the expensive part of the build, running the fiber to the basement. They were ready to go two years ago but decided to wait for G.fast to be ready. There are dozens of G.fast trials underway with British Telecom ready to do 15M lines starting early in 2016.

If you know the technology and industry, it becomes obvious that T will do all of most of the homes whether or not the DirecTV deal goes down. I’ve confirmed through several sources that’s exactly what AT&T plans. Cable is widely going to 400 megabits down (shared) in the next 12 months and a gigabit (shared) soon after. T needs to stay in the game.

Wheeler may not know his comments (below) are somewhere between disingenuous and completely bogus. AT&T’s Jim Cicconi is one of history’s best lobbyists and regularly convinces people 2+2=5.

END_OF_DOCUMENT_TOKEN_TO_BE_REPLACED

AT&T puts universal service repeal in state budget. Buy or build a new home in about 25% of the state of Ohio (by area) and your only way to make a phone call or connect to the Internet will be satellite, which sucks. That will reduce fsd

98% of the U.S. by population may well have a wireless signal but the remaining 1-2% of population is spread over 10-30% of the territory. No one has solid data except the phone companies. The 25% figure is an estimate from Ohio Consumer Counsel Gene Krebs.

END_OF_DOCUMENT_TOKEN_TO_BE_REPLACED

97+% of the Internet is not available on Internet.org. Below, Jeremy Gillula and Jeremy Malcolm of EFF make the point strongly. It is better regarded as a private network dominated by Facebook. The most horrifying thing is Facebook is not paying for it; instead they blackmail telcos in poor countries to give it to them for free.

They threaten to direct their millions of users in many countries to the ISP’s competitor, say Bharti versus Reliance. That’s a classic use of market power, the kind of behavior condemned by economists and prohibited by the principles of antitrust law. Danny Sepulveda at the State Department should step in and demand Facebook not continue to harm the reputation of U.S. corporations.

The EFF does exceptional work and deserves support from all of us.

Internet.org Is Not Neutral, Not Secure, and Not the Internet

END_OF_DOCUMENT_TOKEN_TO_BE_REPLACED 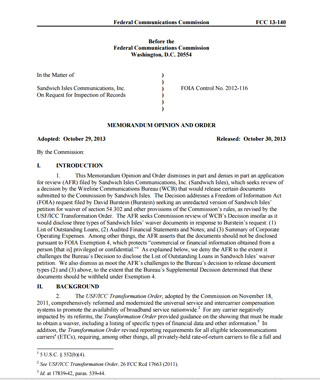 Albert Hee of Sandwich Isles has now been convicted of $2M for fraud, including writing off $96,000 of two hour messages as a necessary business expense. Everyone in policy knew that SI was egregiously abusing the universal service program. The cost to the government and ratepayers is literally in the hundreds of millions. When I saw an SI FCC filing with all the important financial information REDACTED I filed a freedom of information request.

I believe that those collecting taxpayer money should provide all the information necessary to discover waste. I agreed not to request anything that really was sensitive. Initially, the FCC staff agreed, but SI’s expensive DC lawyer, Rick Joyce of Venable, filed an objection, claiming even basic financial information would seriously help their competitors. I disagreed, pointing out that in a different filing SI had claimed they had no competition to justify a subsidy.

Months later (October 29), I received a note from the FCC pointing to a detailed ruling denying me access. Click on the picture to read it.