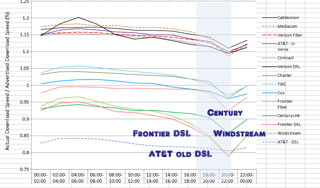 “Up to” claims generally False Advertising. Connecticut-based Frontier must, “reduce its monthly rate for affected customers to $9.99 – a savings of $10 to $20 per month. The reduced rate will remain in effect until the mandated improvements allow Frontier to increase existing download speeds provisioned at 1.5 Mbps or lower to at least 6 Mbps.” In addition, Frontier must spend $150M more than planned on upgrades. The cost of their settlement is over $6.000 for each of 28,000 homes affected.

West Virginia Attorney General Patrick Morrisey achieved something neither Britain’s OFCOM, Germany’s BNetzA or the U.S. FCC or FTC have ever achieved. Since the frist consumer broadband lines were installed around 1999, telcos have knowingly misled customers on both speed and pricing.

The evidence must be compelling for Frontier to agree to such a large settlement. They have a $million/year lawyer/lobbyist on staff, former FCC Commissioner Kathleen Abernathy. She certainly capable of

something like this up for years in court if the case wasn’t very clear. Frontier is particularly vulnerable to complaints of not delivering promised speeds because they are among the worst performers on the FCC tests. (See illustration based on the latest FCC/AskSam testing.)

Verizon decided in 2004 to sell West Virginia and from then on treated the state the way the Romans treated the Sabine women. Frontier promised to fix that when they bought the lines from Verizon. They’ve failed, despite the $40M in stimulus funding NTIA gave them by ignoring their own rules.

The situation is so bad even Republicans are suggesting the state put up the money to create competition.

Eric Eyre and the West Virginia Gazette-Mail have been doing excellent reporting on broadband in their state.

CHARLESTON — West Virginia Attorney General Patrick Morrisey announced today an estimated $160 million settlement with Frontier Communications to resolve complaints involving Internet speeds provided to consumers.The multi-faceted settlement requires Frontier to invest at least $150 million in capital expenditures to increase Internet speeds across West Virginia and provide access to areas currently without high-speed service. It also lowers monthly rates for affected consumers and contributes $500,000 to the state’s Consumer Protection Fund.The agreement is the largest, independently negotiated consumer protection settlement in West Virginia history.Attorney General Morrisey believes the Frontier settlement, over a three-year period, will help provide high-speed Internet coverage to most remaining parts of unconnected, rural West Virginia.“This agreement is a game changer for the Mountain State,” he said. “The settlement helps consumers receive the high-speed service they expected, while directing significant monies to help fix connectivity issues that consistently keep our state from achieving economic success.”Attorney General Morrisey’s office, between 2013 and 2015, received multiple complaints from customers paying for Frontier’s high-speed service, which advertised Internet speeds up to 6 megabits per second.Many consumers advised their Frontier service was slow or did not meet expectations. The subsequent investigation found many customers expecting Internet speeds “up to 6 Mbps” frequently received speeds 1.5 Mbps or lower.Frontier denied any allegation of wrongdoing and entered into the settlement to resolve disputed claims without the necessity of protracted and expensive litigation.The centerpiece of the settlement requires Frontier to invest at least $150 million in capital expenditures, over three years, aimed at establishing and maintaining high-speed Internet across West Virginia.That investment must be in addition to the $180 million in upgrades Frontier has planned as part of the federal government’s Connect America Fund II.Attorney General Morrisey noted this settlement marks “just the beginning” of his office’s efforts on connectivity issues, which if addressed, will allow West Virginia to reach her potential.The settlement also requires Frontier to reduce its monthly rate for affected customers to $9.99 – a savings of $10 to $20 per month. The reduced rate will remain in effect until the mandated improvements allow Frontier to increase existing download speeds provisioned at 1.5 Mbps or lower to at least 6 Mbps.Frontier indicates eligible customers do not need to apply for the price credit. The company expects customers will automatically see the reduction within the next one or two billing cycles.Frontier estimates approximately 28,000 customers will benefit from the rate decrease, in addition to any new customers provisioned at the slower speed. The reductions are expected to cost Frontier $6.25 million per year, although that number will shrink as improvements are completed.“The reduced rate gives Frontier a strong incentive to raise speeds for these customers,” Attorney General Morrisey said.Another provision requires Frontier to pay $500,000 to the state’s Consumer Protection Fund. That payment will offset investigative and monitoring expenses in addition to helping defray the costs of transitioning consumers to higher Internet speeds.Attorney General Morrisey pointed out that no portion of the settlement will be diverted to reimburse outside law firms. Legal work regarding this matter was handled within his office, potentially saving the state hundreds of thousands to millions of dollars in legal fees.Frontier also pledged, in good faith, to address service needs for other customers not included in the aforementioned group of 28,000 consumers, who are not receiving high-speed Internet that meets their expectations.Attorney General Morrisey noted that Frontier cooperated with his office and worked in good faith to structure the agreement.“The only way we become more competitive with neighboring states and lift West Virginia out of poverty is through investments in the state’s infrastructure,” he said. “Through this settlement, we can begin to address the high-speed Internet challenges we face statewide.“We have a strong consumer protection division with a record of delivering for our state’s citizens,” Attorney General Morrisey added.Frontier further agreed, as part of the settlement, to make no attempt at passing costs associated with the settlement onto consumers through any regulatory proceeding, including those before the state Public Service Commission.Those with further questions can contact the Attorney General’s Consumer Protection Division at 800-368-8808 or visit the office online at www.wvago.gov.Frontier also has established a website with additional information, www.frontier.com/WVinfo, and a customer service phone number at 888-449-0217.View a copy of the settlement at http://bit.ly/WVfrontier.