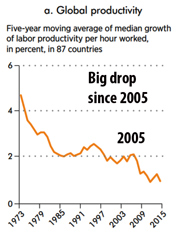 “The broader benefits of higher growth, more jobs, and better services have fallen short.” Deepak Mishra and a team of a dozen at the World Bank early in 2016 burst the myth that the Internet would produce significant economic growth. It’s not in the data, as anyone who looked closely would have seen since at least 2009. Anyone with common sense can see that growth has fallen most places despite a remarkable increase in Internet users. Take a look at the productivity chart at the left. It plummets after 2005, as the worldwide Internet growth accelerated. Just one example: India, one of the fastest growing economies, has lagged far behind in Internet use until the last year or two.

So many of us want to believe the Internet, which we love, would solve many economic problems. So would I; I’ve earned my living since 1999 reporting the Internet. It hasn’t worked. Those who have looked with an objective eye at the actual results have known since about 2005 that the economic impact was often so small studies couldn’t find it. In Washington in 2009, an important Columbia University event in DC made mincemeat of the economic claims based on U.S. data. The World Bank reports that’s also true in the developing world.

Bob Crandall was on the Columbia panel. His highly influential study a few years before had projected enormous benefits. In 2009, he was warning that his conclusions did not apply to the results likely as the Internet penetration grew beyond the early adopters. The first people to connect were those who stood to benefit the most. As the U.S. reached  40, 50 and 70% adoption, the new people signing on were very different than those in earlier days. Scott Wallsten also was dubious. He went on to be the Chief Economist of the Broadband Plan, which carefully did not offer a prediction of growth in jobs or the economy. Soon after, Shane Greenstein, then at Northwestern and now at Harvard, produced an estimate of returns from growth due to broadband spending 50-75% less than the corporate-funded “studies.” I could add a half dozen more.

As we go into 2017, a quick Google search found a dozen claims like “Gross Domestic Product goes up 1.38 percent for every increase in 10 per cent of penetration” in the last month. That claim was based on a nearly worthless “study” a decade ago that used old data and dubious methods. It’s been repeated so many times people believe it.

A note on the World Bank study. Their work on the data is strong. Their conclusions on how to improve things are standard DC consensus thinking and unproven.