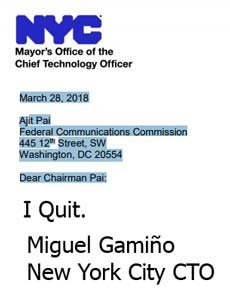 The FCC Broadband Committee recommendations are “Industry priorities without regard for a true public-private partnership. … 75 percent of members represent large telecommunications and cable companies or interests aligned with those companies, … These circumstances give me no choice but to step away.”

Miguel Gamiño Jr., Chief Technology Officer of the City of New York, wrote the letter below to FCC Chairman Ajit Pai. Like San Jose Mayor Sam Liccardo, he quit. He worked hard for 11 months but was overruled by the company people Pai put on the Broadband Deployment Advisory Committee.

Gamiño is refusing to accept a “Pre-packaged one-size-fits-all proposal that industry lobbyists have pushed nationwide rather than working in a cooperative fashion to find creative solutions to dynamic local issues.”

Pai’s claim that getting rid of regulations on small cells will have a major impact on the deployment of 5G is almost certainly wrong. The telcos have already decided to deploy over 100,000 5G cells for business & competitive reasons. The main impact will be to save the telcos (and cablecos) a lot of money.

There’s no evidence I can find that most of that money will be spent on the network. Government “incentives” are giveaways to shareholders unless most of the money goes to investment. Otherwise, it to shareholders. In this case, the savings on the cells already planned or predictable will almost certainly dwarf the amount of additional investment.

Any reporter – or Congressman – hearing about “incentives” needs to ask the question, “How much more will be built?” Almost always, the answer will be disappointing if you get one.

The New York Chapter of the Internet Society resolved April 2 “Resolved: That ISOC-NY supports the letter of New York City Chief Technology Officer re: FCC Broadband. We urge the FCC not to move forward without majority support from non-corporate members. We also recognize that getting rid of unnecessary regulations on small cells is a good idea.”

I made the motion.

I appreciate the opportunity to have served on the Broadband Deployment Advisory Committee’s (BDAC) Model Code for Municipalities Working Group over the past 11 months. Along with my designated alternates, we have collectively participated in approximately 100 hours of calls, attended a full day in-person meeting in Washington D.C., and have submitted countless edits, drafts, and comments in an effort to share insights from our many decades-long successful experience in franchising wired and wireless uses of New York City’s public rights-of-way.

As the BDAC’s process is scheduled to come to a close, it is clear that despite good faith efforts by both the staff and members involved, the membership structure and meeting format of the BDAC has skewed the drafting of the proposed recommendations towards industry priorities without regard for a true public-private partnership.

These circumstances give me no choice but to step away from this committee in order to direct the City’s energy and resources to alternative forums that provide more productive opportunities for achieving the kind of cooperative progress in advancing broadband deployment in the public interest.

I have expressed concerns with other municipal colleagues in multiple meetings and documents that the makeup of the BDAC, with roughly 75 percent of members representing large telecommunications and cable companies or interests aligned with those companies, would result in recommendations unfavorable to localities looking to responsibly manage public rights-of-way to promote public safety, quality of life, and other priorities.

This has resulted in the BDAC producing pre-packaged one-size-fits all proposals that industry lobbyists have pushed nationwide rather than working in a cooperative fashion to find creative solutions to dynamic local issues. In our own working group, there have been no efforts to add more voices familiar with city operations or to replace the former working group Vice Chair San Jose Mayor Sam Liccardo. This has prevented us from addressing the diversity of concerns and solutions that would be offered by a better representation of the nearly 40,000 local governments nationwide.

I am concerned that the current draft of the code could lead to municipalities entering into agreements with wireless providers that are counter to the interests of their constituents. Most importantly, we do not believe that the recommendations will help close the digital divide. Therefore, we are not able to recommend that a municipality adopt the code without significant legal and financial analysis or for it to be referenced as a “model” for legislatures, the FCC, or other regulatory bodies. Despite our objections to the operations and findings of the BDAC, we remain committed to working with all parties to address the digital divide.

Mayor Bill de Blasio has set the ambitious goal to provide affordable, high-speed internet to all New Yorkers by 2025 and it is imperative that we engage in productive and respectful partnerships with the private sector to reach that goal. In addition, we have found it useful to engage and share information and best practices with other cities.

In this regard, Mayor de Blasio, along with over a dozen other mayors, recently announced a pledge to promote the principles of net neutrality though our local authority. This nationwide partnership, which is growing daily, can also serve as an important network to share best practices on issues around broadband deployment.

We remain open to working with the FCC and other branches of the federal government as well as the telecom industry, digital equity advocates, organized labor and other key stakeholders. Note that I will be departing from City service in the upcoming weeks, however the City had chosen not to designate a replacement in my absence for the reasons listed above.

Thank you again for to the opportunity to work on this issue on a national level, and we hope to work with you again in a more productive forum.