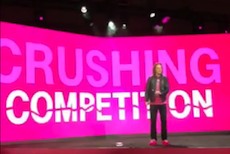 Some facts and researched opinions. I’ve tried to be neutral but I have a pro-consumer bias. I’ve editorialized strongly against the deal.

On the effects of 4-3 Tmo says prices will come down because of the deal. The best research is from Pal Zarandy at Rewheel, who just did a major study. He found prices were 40%-50% higher in Germany and Austria (4-3) than six others, including France. Gigabyte price development in 4 to 3 consolidated versus 4-MNO European markets – September 2013 to March 2018. Because France has so dramatically cut prices, my figure would be lower, “10%-20%, sometimes more.” Canada & France went from 3 to 4 with large price drops, which are now happening in Italy. Dubious. Wireless prices will go down because the cost per bit is decreasing rapidly. They will probably be higher than without the deal.

On whether 5G will come faster “Do it all so much faster than either company could on its own,” Legere said in the release. T-Mobile CTO Neville Ray told MWC T-Mobile Building Out 5G in 30 Cities This Year …and That’s Just the Start. He also committed to the entire country by 2020. My comment, admittedly snarky, is, “The only way the new T-Mobile could bring 5G faster is to build it in 2017.” That would be difficult at this point. It’s also unlikely to cover the whole country any earlier than 2020. Tmo VP Technology Karri Kuoppamaki last week emphasized how their 600 MHz spectrum will let them reach the whole country by 2020. Unlikely

“Combining is the only way they can fight back against the two industry leaders.” Quote from Times. We all know how effectively T-Mobile has been competing. CEO Legere: “The T-Mobile team just keeps kicking the competition’s butt and bringing even more choices to consumers.“ “T-Mobile will be bigger wireless company than AT&T in 5 years.” False, based on history and strong CEO comments.

On whether Sprint could survive without the merger Many, many statements by the top executives of Sprint on financial calls. If they were lying to Wall Street, they could be prosecuted. A close look at Sprint finances and networks would make clear that Sprint has deep problems but also plausible ways to fix them. (Craig Moffett, an analyst I learn from, disagrees.) “Sprint has posted ten consecutive quarters of postpaid net customer additions. It has also reversed its fortunes in the prepaid space, adding 63,000 in the third quarter.” Unproven

On whether the T-Mobile 5G is a “seismic shift” “Going from 4G to 5G is like going from black and white to color TV. … It’s a seismic shift — one that only the combined company can unlock nationwide to fuel the next wave of mobile innovation.” (Claure in the press release.) T-Mobile 4G in part of Manhattan is 500 megabits today. They have said they will roll that technology to 15,000 small cells. (LAA, 3-4 CA, 4×4 MIMO.) Is going from 500 megabit download to 600 megabit download going to change your experience that profoundly? That’s the difference between T-Mobile’s 4G LTE and “5G” NR. False

This week, T-Mobile Technology VP Karri Kuoppamaki said the 5G improvements would be much less than “seismic,” something like 25%. That’s less than the improvement when LTE added Carrier Aggregation four years ago, 4×4 MIMO in 2016, or 256 QAM in 2017. No one called them a new generation, In addition, the industry consensus is the advanced uses are far away. “The enhanced mobile broadband use case will be driving more than 99 percent of the 5G investments over the next five years.” Stefan Pongratz. In other words, for at least five years, 5G will provide more network capacity but will be used in the same way as LTE.

“5G” is not “5G.” Much will not be the truly high speeds of millimeter wave. Much of what is now called “5G” is a marketing invention in the last year, including T-Mobile’s 600 MHz “5G.” Low & mid-band “5G” is the same as 4G LTE with a software tweak (NR – New radio.) Only millimeter wave is much faster than 4G from 2018 equipment. mmWave can be 2-3 times faster than the LTE at 500 meg T-Mobile is rolling out. Verizon and AT&T are using millimeter wave, 28 & 39 GHz. T-Mobile is using 600 MHz & a pr campaign. A year ago, millimeter wave and perhaps Massive MIMO were considered 5G. (See IMT-2020 in standards.) In 2017, lobbyists and marketing people extended the definition of “5G” to anything with a software improvement that does little for speed or capacity. (NR) Corporate run 3GPP expanded the standard. Amazingly few reporters realized that meant most 5G deployments were nothing special. AT&T & Verizon are doing millimeter wave but low and mid-band will be 80% to 90% for at least several years. True

Is even the real 5G, millimeter wave, revolutionary? I have quotes rejecting the 5G hype from CEO, CTOs,, or other senior technical people at AT&T, Verizon, British Telecom, Deutsche Telecom, Orange and Telefonica. D.C. has fallen for spin. So have too many reporters. Professor Gerhard Fettweis, the leading expert, told a conference last week. “Autonomous cars will not use 5G because they have to work on all roads. They use radar and LIDAR instead.” (Story to come.) VR, AR, and telemedicine are working well today without 5G. Remote surgery only needs 5G if doctors intend to work from the beach. (Ask me if you don’t see that.) Nearly all the independent technical people see more and faster broadband as the primary use for 5G for years. That makes 5G important for the industry but definitely not world-changing. Unproven opinion

“5G offers more reliability than 4G or LTE” Washington Post. Reliability is planned for 5G URLLC (Ultra Reliable and Low Latency Communications.) The full standard for that isn’t expected until late 2019 and wide deployment mostly long after. T-Mobile’s nationwide “5G” network does not support URLLC and may never do so, Some engineers are dubious about whether the reliability will be achieved, so firm statements are probably dubious. While 5G may offer more reliability one day, using the present tense is an actual error. Unproven but likely

Is 5g required for autonomous cars? The very respected Professor Gerhard Fettweis from Dresden last week at a conference said, “Autonomous cars do not need 5G.” They work on LIDAR and radar. 5G mmWave will not cover most roads for a decade or more. There will always be places not covered. Autonomous cars have to be able to work without 5G. IEEE has video of the session; I haven’t written it up yet. At least one on the panel disagreed. I would recommend checking with an engineer currently active in the field before publishing on the topic. Many policy people are giving false information, mostly because they don’t understand. Probably not, per authority

Is 5G needed for telemedicine or IoT?  The answer is probably not, but I don’t have time to research and write it right now. Again, much of what’s said is simply inaccurate; a newspaper we all respect made an error here.

More to come. I’m always happy to share sources, files, and what I’ve learned with reporters or anyone making policy. I usually can provide a short soundbite if you need one. Do ask and no reciprocation necessary.