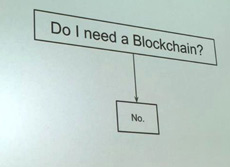 Bitcoin’s unreal hype has obscured that it is mostly used to facilitate drug deals, ransomware, tax evasion, and even the occasional murder for hire. After the 60% price drop, demand for bitcoin mining gear has fallen so much TSMC has to lower sales estimates for 2018. (That’s good news for telecom. Qualcomm and probably others are close to going into production on 5G chips at TSMC. But Apple has bought up so much of TSMC’s 7 nm capacity that chip quantities could be severely limited until well into 2019 unless TSMC demand drops.)

Now, Austrian Ambassador in Tehran Stefan Scholz has suggested it could be a powerful boost to the European intent to bypass the U.S. economic blockade. That could provide demand for $billions of bitcoins.

Financial Express quotes Scholz, “One of the ways for safeguarding European interests in Iran is to tap the digital payment methods and cryptocurrency channels.” He added, “unorthodox and innovative measures” were being considered to allow banking transactions to continue. We are all in this together, since the EU is facing a net loss of 10 billion euros ($11.7 billion) in lost trade with Iran next year.”

Blockchain is potentially good stuff, routing around institutions in a sometimes useful way.

The illustration from Vint Cerf is right that few if any need blockchain when a database suffices. However, Jonathan Askin is persuasive that blockchain makes interesting disintermediation practical, maybe even community alternatives to Facebook/Google. Bitcoin fools distract from real uses.

Several Nobel Laureates think Bitcoin is a scam and Ponzi scheme. I’m pretty sure they are 90% but not 100% correct.

From Baidu, some of what they are doing with Blockchain.

What is a super chain?

The Super Chain is a blockchain 3.0 solution that Baidu plans to open source with powerful network throughput and high concurrency for general smart contract processing. Based on the pluggable consensus mechanism, DAG parallel computing network and stereo network, it truly breaks through the technical bottleneck of the current blockchain and paves the way for the wide application of blockchain. In addition, XuperChain’s maximum compatibility with Bitcoin and Ethereum is friendly to blockchain developers and has a low migration threshold. The global deployment of XuperChain is the foundation of XuperChain’s credibility. Super nodes with powerful performance participate in the competition of accounting rights to ensure the efficiency of the whole network operation; while other lightweight nodes act as supervisory nodes, monitoring super nodes to perform their duties, thus forming a more credible autonomous blockchain operation. system.

The superchain proposes the concept of supercomputing nodes, using supercomputers and distributed architectures to solve blockchain network computing power and storage problems. At the same time, the DAG network is combined with the side chain and parallel chain technology to realize the core technology that makes maximum use of parallel computing power. The network form of the entire superchain is as follows:

The superchain manages the entire superchain network through a root chain. The root chain can be upgraded to any consensus mechanism through voting mechanisms, including but not limited to POW, POS, etc.

The functions of the super chain mainly include: creating parallel chain and super chain network management. Anyone wants to use the superchain network, it just needs to call the interface of the root chain and create a block of its own. When creating, you can specify a consensus mechanism. Any call to the Root API interface and functionality requires fuel consumption. When creating a blockchain, you can specify the Genesis block parameters to determine the creation rules.

2, has a complete blockchain computing power, do not need to share computing power with others (there is no such an application service coexisting soaring, resulting in the entire super-chain network 瘫痪 situation)

3, can develop their own consensus mechanism and mining incentive strategy

4, can write their own smart contracts, and have independent resources to run