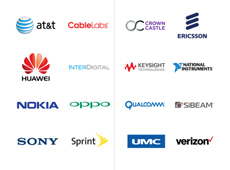 Some of the very best ideas in telecom go nowhere because it’s so hard to get funding. A world-renowned researcher struggled recently although his ideas were endorsed by some of the best in the business. (I think that’s solved.) The U.S. is paying a very heavy price for letting Bell Labs go and not requiring the remaining companies to invest in research.

Fortunately, many of the top Professors have found corporate funding for their research. Gerhard Fettweis is Vodafone Professor at the University of Dresden. NYU Wireless, probably the world’s leading 5G center, has 16 funders in the picture at left. Nokia sponsors their Brooklyn 5G conference, the best of the year.

Some China fearing Congressmen want to knock Huawei off that list because they are Chinese. Huawei now spends more on R & D then the next three telecom suppliers combined. They are the world leaders in several areas of telecom technology, so they bring expertise as well as technology. Huawei provides support to almost every major academic research center. I visited many, and the Huawei support has made a difference.

All the companies working with universities gain knowledge but they share it as well. Cutting them out would seriously slow progress.

I would normally pass on reprinting this article Huawei sent me, although I welcome original contributed articles. But it’s on target and I strongly agree.

For the record: Huawei has paid my expenses to their events and I might sell them advertising.

Congress is wrong to question Huawei’s academic partnerships. The fruits of the research we fund are a public good not a threat to America. Over the past decade, Huawei has invested more than $60bn in research and development globally

Recently my company Huawei was strongly criticised by several members of the US Congress. They asked the US secretary of education to investigate whether our cooperation with US universities on basic scientific research might threaten US national security.

I believe this criticism displays an ignorance of how contemporary science and innovation work and I recently described it as “ ill-informed” in a media interview. I did not mean this as a personal attack. Rather I was seeking to highlight the importance of academic freedom as an essential feature of modern universities, one that underpins all technological development and helps cultivate the next generation of scientific talent. Academic freedom is the cornerstone of higher learning.

This freedom from political and other interference allows the US consistently to attract the world’s brightest minds to study and conduct research within its borders. It also supports the US’s continued status as a global technology leader.

I hold a doctorate in engineering and have experience in basic research which the National Science Foundation defines as “study directed toward greater knowledge or understanding . . . without specific applications toward processes or products”. While corporate research and development tends to focus on commercial outcomes, universities devote time to mathematics, algorithms, material science and other applications that might never make money.

Editor’s note: One of the most important problems for networker builders today is the relatively weak performance of FDD Massive MIMO. TDD Massive MIMO regularly increases performance 4-7X. FDD, required in most lower frequencies, is generally only half as effective. I have more than half a dozen academic papers trying to solve that problem. That research will be crucial as Sprint & Verizon roll out Massive MIMO.

Even if the research pays off eventually, closing the gap between a theory and a commercial product can take decades. Collaboration between universities and businesses can accelerate this process. The exchange of knowledge and resources among the private sector, academia, and research institutes, known as knowledge transfer, has become a vital driver of scientific and technological progress.

But US federal funding for higher education research has fallen steadily over the past decade. Today it represents less than 50 per cent of total American university research funding. Corporate sponsorship from companies such as Huawei provides much of the rest. The amount of money we allocate for research at US universities is relatively modest — approximately $10m last year. But it provides needed support in the form of funding, facilities, and laboratory equipment. Our collaboration with universities gives college and postgraduate students the chance to receive training and hands-on experience. We provide this support with no expectation of direct commercial return.

Contrary to what our critics allege, the fruits of this research constitute a public good rather than a threat to America. The findings made possible through our university partnerships are published and disseminated worldwide through dissertations and papers by professors, PhDs, and postgraduate students. Like other corporate supporters of university research — including US businesses that support Chinese universities — including US businesses that support Chinese universities — Huawei does not gain exclusive ownership of, or access to, the findings of the research we support and we do not dictate what is published. Science is borderless, and we hope that the results of our partnerships will reach as many people as possible.

Like any technology company, Huawei benefits from the general advancement of science and technology worldwide. Ultimately, however, our ability to provide competitive products is a result of our own long-term investment in R&D. Last year, Huawei invested $13.8 billion in research and development globally, bringing our total investment over the past decade to more than $60 billion. Huawei has been granted nearly 80,000 patents worldwide, including 10,000 patents in the US. Many of these are essential patents vital to the telecommunications industry. As such, they represent our modest contribution to the development of the digital economy.

Before any basic research can deliver tangible benefits to society, universities and businesses must set off together on a long and sometimes arduous journey. This requires unstinting work by countless scientists and engineers. Such people deserve respect, not groundless accusations from sceptical politicians, for their efforts. Open-minded political leaders should work to ensure that US universities continue to enjoy the academic freedom that drives American progress in science and technology. Ideally, they will bring to that task the same depth of understanding, curiosity, and spirit of fact-finding inquiry displayed by the world’s leading scientists. The writer currently holds the rotating chairmanship of Huawei Technologies

Reprinted from The Financial Times