Telco CEOs worldwide are discovering something they should have learned in kindergarten: Share everything.  One network is cheaper than two. Two are cheaper than the 4-7 usually needed for competition to work its magic. In China, the government has directed the telcos to work together to reduce the cost of 5G. When the Minister speaks, the telcos listen.

This is a worldwide trend. Vodafone is cooperating with Telecom Italia and UK’s Telefonica O2. In Rwanda, the government has only allowed a single 4G network, wholesale only. The result: one of the poorest countries in the world better 4G coverage than many European nations. 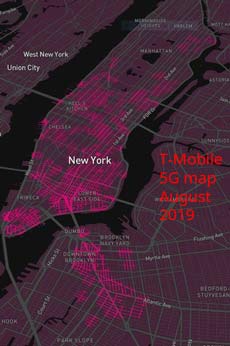 Verizon and T-Mobile believe 5G speeds are not necessary in many of the districts in which poorer people live. The pink areas in the Manhattan map at left are where T-Mobile is offering its 5G. The darker, more purple areas, are not served with T-Mobile’s generally excellent 5G. The upper part of Manhattan, mostly purple, includes Harlem and the mostly Latino Washington Heights. The Brooklyn area on the lower right also shows many areas not covered. (Much but not all of the pink are fairly commercial or wealthy areas. I do not think T-Mobile specifically intended to exclude people of colour, but that seems to be the practical effect.

Verizon Consumer CEO Ronan Dunne is blunt. More than half of Verizon customers will get 4G speeds, 70% to 90% slower than the other half getting the gigabit 5G.

So we’ve taken a very clear view that we want to have both a coverage strategy and a capability strategy. And a very large majority of the volume of data that we carry on our networks goes to large, dense urban environments. So from a population point of view, it’ll be significantly less than half of the customers. But from a data traffic point of view, it’s significantly more than half. So when it comes to the ability to use 5G as a significant capacity enhancement, there’s more of an opportunity to leverage that in the urban areas. Secondly, from a use cases point of view, while we can deploy, and we will deploy a 5G nationwide offering, the lower down the spectrum tiers you go, the more that will approximate to a good 4G service. …

Millimetre wave gives you between 1- and 2-gig download speeds. The mid-bands and lowers are giving you in the low hundreds. So it’s already very clear, the distinction between the 2.”

Guess who will get the slow stuff.