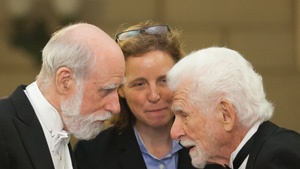 Vint Cerf, Megan Smith, Marty CooperWith congestion already a problem, do we want more traffic from telcos? WiFi works if and only if users cooperate. Verizon, T-Mobile and SKT in Korea have no track record in spectrum sharing and have not shown they can share fairly even the spectrum they control that’s unused. They are testing extending LTE to WiFi spectrum. It’s time to resolve how that might work so that it doesn’t seriously reduce WiFi capacity for other purposes.

I believe that new WiFi applications will switch even more traffic to WiFi and reduce consumer costs. For example, Marconi fellow John Cioffi has shown a way to a home gigabit using WiFI and DSL.Many agree with me that more WiFi spectrum is the most efficient way to deliver more capacity to all of us, although Marconi Fellow Marty Cooper points to technical advantages of WiFi. Informally, the U.S. FCC has decided that at least half of the 3.5 GHz spectrum coming available will be available for WiFi.

much more at 5GW